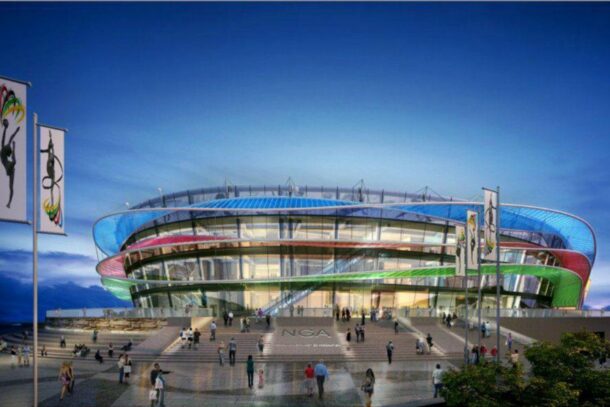 The National Gymnastics Arena will be a circa 9,000 seater Arena close to the Koroglu Metro station on the Heydar Aliyev Highway, which is the main route in and out of the city from the Airport.

The NGA is primarily designed to host Rhythmic and Artistic Gymnastics at competition level. The Arena is specifically designed to be able to adapt the Main Arena to host a variety of functions or sporting events if required. The Arena has the ability to stretch from 5,000 to 9,000 seats, depending on the size and the nature of the event it would be hosting. A very impressive design has been implemented on the seats that retract in and out of the arena floor to provide required seating for the event. With this technology the Arena can be large and grand to host big events, and small and intimate for smaller events such as Rhythmic Gymnastics.

On a day to day basis the NGA will be able to host gymnasts training for International competitions. The facilities for training gymnasts will include offices / training halls / auditoriums canteens / gymnasium. There are also boarding facilities at the Arena for athletes which can guest 59 persons. A cafeteria has also been included for athletes training at the Arena on a daily basis.

As for the arena facilities, there will be 2 main concourse levels with welfare facilities and food and beverage outlets, between them on the middle level of the arena will be the box level, which will host the VIP’s in the various size luxury boxes. The box level also has two large cafeterias on each wing to accommodate large VIP/Sponsors gatherings during the events.

When the NGA hosts international competitions there will be all the requirements for international media and sponsors expected of today’s world class sporting venues, from interview rooms and media control center and sponsor rooms to media press rooms.