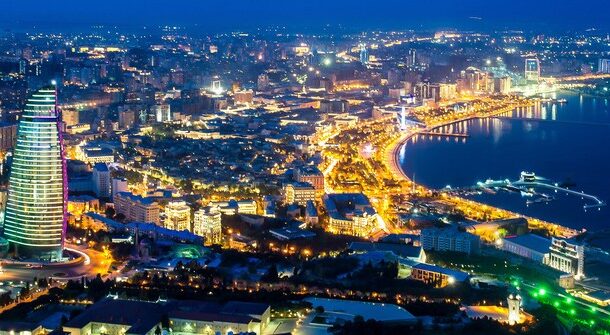 The Baku, capital of Azerbaijan Republic with ancient history, natural and geographical conditions, abundant surface and underground resources, favorable climate, international transportation centers, modern and strong infrastructure and developed economy becomes one of the most beautiful capital cities of the region with its considerable strategic importance, as well as urban culture, modernity and beauty. Baku, the capital of the Republic of Azerbaijan is the largest commercial, cultural and scientific center in the Caucasus region, and the largest port on the Caspian Sea. Baku is located in the South of Absheron peninsula, on the coast of the Caspian Sea, on the 40 ° parallel. Baku is one of the biggest cities in the East with its antiquity, territory and population, which now covers 150 sq.km and goes out along the sea bay with approximately 20 km. The capital’s population is about 3 million. The city center is in style of amphitheatre, has an access to the sea from both sides. The city was built in right-angled direction. Streets are narrow and crooked in Icheri Sheher (Old City). Buildings in the center, main lines are close, in the suburban far-between. Suburban areas are oil extraction centers. Baku being the giant oil and gas industry center, you can find the railway, machinery, construction materials (cement production, lime production, stone quarries) enterprises, mineral waters (Shikh, Surakhani). A large number of mud volcanoes around the city (Keyraki, Lokbatan) and salt lakes (Boyukshor, Xocahasan). There are beaches and the Absheron resort around the city. Read More
The south-west side of great Baku has more dry climate. The annual precipitation here is less than 150 mm. The north wind – Khazri and south wind – Gilavar blows here. People inhabited since very ancient times in the city of Baku and Absheron peninsula and created here settlements. This was connected to the physical-geographical position of Baku, located in the center of junction of migration and trade routes from the North to the South, from the West to the East (‘Silk Road’), its climate and energy resources and fuel called naphtha. ‘Book of The Dead’ contained information for the first time on Baku 3500 years BC, in time of Egyptian Pharaoh Menesa. At the same time, writings on the walls in Absheron and Gobustan of 12 thousand years ago, archeological findings, as well stone writing of August Guy Octavi about military camps made around Baku (40 km to the south) by Emperor of Rome Pompeii and Lukul in order to occupy Caucasus in I century BC prove ancientry of Baku.Considering these histories, Baku ages more than 5,5 thousand. Baku was one of the main cities Shirvanshahs state in the XII century, the Safavid state in the XVI century, the Ottoman Empire in the XVII century, of the Baku khanate in the XVIII century. On September 15, 1918, after the liberation Baku was proclaimed capital city of  Azerbaijan Democratic Republic. The capital city Baku is famous for its Boulevard, Fountain Square, the State Flag Square, the newly constructed “Flame Towers”, “Crystal Hall” where the “Eurovision” song contest was held, modern  cultural center – “Heydar Aliyev” which is one of the world’s 5 best architectures, architectural buildings as mosques, sandy shores and beaches. There are a lot of historical and architectural monuments in Baku that belongs to different periods. “Ateshgah” fire temple that existed before Islam, is located in 30 km in the south-eastern part of Surakhani settlement of the Absheron peninsula.

The ancient architectural monuments of Baku – the Palace of the Shirvanshahs, Old City Historical-Architectural Reserve and the Maiden’s Tower in 2000 and Gobustan National Park which is famous for the ancient rock drawings in 2007 was included to the List of Intangible Cultural Heritage of Humanity by UNESCO. Monuments of all periods from Mesolithic till the Middle Ages can be found at Gobustan which is one of the most ancient and rich historical monuments. The Maiden Tower which is one of the symbols of Baku was described on the currency banknotes of Azerbaijan. The tradition goes on holding ancient national holiday of Novruz in the Maiden Tower and its surrounding area was included by UNESCO in 2009 in the list of Intangible Cultural Heritage of Humanity The world’s first offshore oil platform – Oil Rocks is located in Baku. The first university in the East, and the first Academy of Sciences is also in Baku. The first opera, first newspaper, first library in the East was established here. Modern Baku is characterized by its oil refineries, petro-chemical, machine-building and building materials industry. Now Baku is also an important transport hub. This transport plays an important role here. There are international airport and sea port in the city. The Old City which is ancient settlement of Baku as Historical-Architectural Preserve is not only cultural heritage of Azerbaijan people, it is also the city and district of residence, as well as historical and architectural complex. Since 1918, Baku city which has republican subordination was divided into 11 administrative districts and 48 villages and towns. The Baku Metro that started operating since 1967 in Baku, the largest with a capacity of 34.6 km length of the vehicle, 2 lines, 23 stations are operating and three are under construction, those stations have 23 vestibules. One of the distinguishing features of the metro is the cross of its lines in the hilly area of ​​the city with one another. Baku and oil are inseparable concepts. Because of the oil fields which covers the Absheron Peninsula, the oil production and oil refining, energy, machinery, chemical, industrial fields are developed in Baku and around of Baku. One of the largest ports of the Caspian Sea in the shipbuilding sector is developing in Baku. The climate of Absheron peninsula where Baku locates differs with its temperate hot summers and short mild winters. Absheron which is located on the same latitude with Greece and Italy, is one of the most favorable places for rest of the country with less precipitation and slightly higher temperature. The Caspian Sea port of Baku operates year-round as it doesn’t freeze. The average annual temperature in Baku is similar to the temperature of the earth. The city is located 28 meters below the sea level. About 35 universities, dozens of colleges and high schools function in Baku. Many of companies in the banking and finance, as well as Baku Stock Exchange operates in the city.
Culture

Baku is the largest cultural center of Azerbaijan. It is the place where a national theatre, the first in Muslim East, lifted the curtain, the first opera was performed, the first Azerbaijan newspaper was published, the first Azerbaijan library was opened. Today Baku is known to have 30 museums, 7 theatres, 11 institutions of higher education, philharmonic, opera theatre, film studio, cinema theaters and libraries housed in the city’s most beautiful buildings having an interior decoration which is every bit as good as their interior cultural content.